The Whirlwind and the Kiva

A peace filled day to you. I hope during the past couple of weeks that you have been taking time to be still and just breathe. There has been so much to process, act upon, mourn, speak up about, and transform. During times that feel tumultuous, it’s more important than ever to maintain our contemplative practices.

I was reflecting the other day on a ring I have worn every day for years that has become part of my contemplative practice. On it are symbols for the whirlwind and the Kiva. The Kiva is an underground, sacred ceremonial space used in some native traditions, most notably in the Pueblo Indian tradition. The ring has been a powerful reminder for me since the day I put it on. For me, it symbolizes the sacred space within that I can return to at any point, especially when I can feel the whirlwind start to swirl. That whirlwind can be simply the thoughts racing in my mind or, as in the past two weeks or so, the whirlwind of events in our nation and around the world. No matter the source, when the whirlwind spins and threatens to at the very least throw us off center and at the worst rob us of our ability to make conscious choices, the best thing we can do is remember to connect with the stillness within ourselves before reacting. Much easier said than done, I know, which is why I wear a reminder!

The events of the past few weeks also prompted me to return to a topic that is important to me and that I have been exploring over the past few years; spiritual activism. It’s a term that in my explorations of it, I found I had to define for myself. I read back through a previous email I sent out about the topic, which has become an essay that will be featured in my next collection of poetry. The part that jumped out at me in rereading it this week was this thought, “Being still within myself allows me to engage rather than enrage.”

It’s infinitely more difficult to engage with someone and truly be heard when I come from a place of rage within myself or if I have intentionally provoked it within someone else. It is a challenge for me, because my natural inclination in the face of some of what we’ve seen over the past few weeks is to get riled up! I honestly wish more people had gotten riled up about racism long before now, but that’s a different conversation.

What I witnessed in attending several marches and in watching them through the news coverage, was people who were vocal and angry, and yet, who wanted to engage in a conversation about real, substantive change. People who, I’m realizing now, wanted to harness the energy of the whirlwind to create transformation!

What I was witnessing was exactly that, a desire to harness the energy and power of the whirlwind. That power does not have to be destructive or harmful, it can be creative and transformative if we can approach it from a place of consciousness, if we approach it from a desire to engage rather than enrage. Contrary to what was sometimes shown on the news and contrary to what happened in some isolated incidents, the marches throughout the world were overall a peaceful and powerful harnessing of the whirlwind.

To me that is the gift of spiritual activism, consciously harnessing a power for change and transformation in a creative, constructive way (even if it leads to a necessary deconstructing of broken systems), as opposed to an unconscious destructive force that leaves only devastation behind. When we begin from that stillness within ourselves and are clear about our intentions for positive change we can then emerge into the whirlwind and use its creative power to help create a more equitable, compassionate, harmonious world. I won’t always succeed, but that is how I intend to show up during this time of much needed transformation, so that I can engage in the conversation with love and compassion and the strength of the whirlwind. 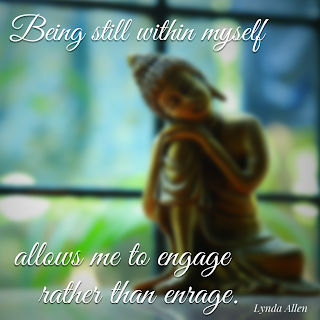 Posted by Lynda Allen at 4:20 PM No comments:

The other day I shared on Facebook a snippet from my morning writing: Consciousness is your gift. Open it. I’ve been sitting with that statement. Being sentient beings is an amazing gift. We can feel love and joy. We can be aware of and celebrate our own aliveness and place in the cosmos. But we have a choice as we move through our days; we can live consciously or unconsciously. We can try to bring that awareness to all we do, each interaction, each choice that might help or harm the Earth, each opportunity to reach out with kindness, each interaction with other creatures we share the Earth with. For me it’s like having tools of consciousness. We have a toolbox full of things like love, kindness, empathy, compassion, awareness, peace, joy, conscious choice, and more. We all have the same tools in our toolbox. It’s all about whether you open it up and use them.

For me that is a daily practice. It can be so easy to go through the day on autopilot, without thinking about the choices we are making. Our practice of mindfulness helps us turn off the autopilot and take responsibility for how we show up in our days, which actually can bring a glorious sense of freedom! I get to choose how to react to any given situation, how I want to show up, who I want to be. Knowing that I have so many tools to help me in those choices, to help me live consciously, and to show up as who I want to be is a relief! Honestly, I want to come to the end of my days with a toolbox full of tools that are worn out from use!

Through opportunities like meditation groups or in any relationship we can share our tools with each other, and the cool thing about these tools is that you can share them and yet still have them in your own tool box! You don’t have to worry about loaning one to a neighbor and never getting it back because if you share kindness or love with someone, you receive it back in the simple act of offering it.  Sharing love or kindness or empathy increases it within your own heart, the best toolbox we could have.

I hope you will take some time this week to sit in appreciation for the amazing gift of consciousness that is ours, and celebrate the beautiful tools that fill your heart!

Posted by Lynda Allen at 7:30 AM No comments:

As the Winter Solstice Approaches

It is December.
The winter solstice approaches.
While it heralds the beginning of winter,
a time of contemplation and retreat,
more importantly for me
it marks the returning of the light.
A gradual shift each day that can be seen
if looked for.

Before its arrival, I will sift through
the experiences and lessons of the fading year,
which were plentiful,
using a sieve fine enough to separate
those worth carrying forward
and those that can be left behind
upon the sands of time.

Those worth keeping,
I will lay gently within my heart
where they will be warm and cherished,
knowing that I may return to them
when I have a moment of forgetting
or despair,
that I may revive myself by their light.

Then, as the solstice dawns I will celebrate my divine light
and the gift of guidance it provides,
committing again to nurture it
and let it increase daily, as nature illustrates.
A gradual shift each day that can be seen
if looked for.

So illuminated, I will greet the new year.

Posted by Lynda Allen at 7:13 AM No comments: